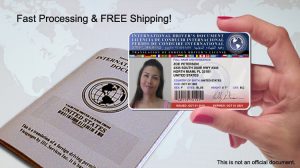 Want to know how to obtain your international driver’s license? Keep reading.

When traveling, having proper identification will save you time and money. No matter where you go, having your IDP will make it easier to communicate and speak to other foreigners. Find on more on the online application for the international driver’s license in this post.

Britain Drivers Are Required to Have Their IDP

Recently, Britain drivers are warned that their driver’s license isn’t able to be valid within the European Union if the existing nations have no agreements in place. If no compromise is made, motorists might have to buy additional permits or licenses to let them drive within the EU.

On March 2019, motorists will have to hold a full UK driving license and an IDP to drive legally. Earlier in March, DoT published the guidance on “Driving in the EU if there’s no Brexit deal.”

Under recent laws, a UK driving license is accepted in the EU and motorists can drive for both leisure and work purposes without issue. According to DoT’s information, there are two different IDP types that are required in EU countries.

At some point, it will be used for the UK during the same day and will be recognized in other EY countries, such as Switzerland and Norway.

Benefits of Having an IDP

An IDP acts as an extra form of photo identification, as well as giving an extra translation of your domestic license in 10 different languages. Most car rental agencies will request for an IDP, even if one might not be required to drive in the country.

Your IDP is valid in countries that signed the 1948 Convention on Road Maps. Also, only the CAA clubs can legally issue IDPs. Remember, non-CAA issued IDPs are fake, and might not be able to protect you from a foreign country.

And if you’re planning to drive in a country where English isn’t the primary language, we suggest that you get an International Driving Permit. This will help your information become processed by officials and reduce the barriers when speaking with the local authorities.

When getting your IDP, you have to obtain it from the AATA or the AAA. You can either apply for it online or through one of their physical offices. If you need to get your IDP within the same day, its best to apply in office.

Want to know if your international driver’s license application is legitimate? The application cost. Most scam services will attempt to sell the IDP application for over $20. Don’t fall for it. The AAA and AATA only charge $20 for an application, making them easier to

In the end, you have to receive your international driver’s license. It will save you time and hassle when communicating with border patrol, and foreign city officials. Thus, we suggest that you get your IDP to ensure that your travels are a smooth, safe, and fun one.