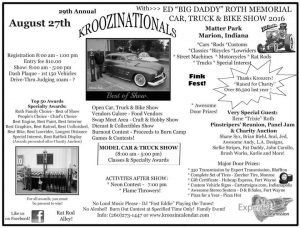 The Kroozinationals 2016 show was held at Matter Park in Marion, Indiana on August 27, 2016.  This show is also a host to the Ed Big Daddy Roth Memorial Event with special gust Ilene Roth. Kroozinationals 2016 was more than just a car show, with events such as Pin up contest, moon pie eating contest, model car contest, and much more!  The show also had a swap meet area, pin strippers reunion and a charity auction, if you ever became tired of seeing the vehicles there’s more than enough at this show for you to enjoy.

The show is open to those who hold their own car shows, cruise ins, swap meets, and more to come and advertise to all the show comers.  Kroozinationals 2016 also gives out trophies to the top 50 rides and specialty awards, what more could you ask from a car show with all the events, rides, and trophies?

For all our audio people, Kroozinatioanls 2016 also has an audio sound off competition for you to come and compete to see who has the loudest ride! For more information on next year show check out their website

Looking for more coverage by Gauge Magazine? We have years of previous coverage from show all around the United States!