Performance Racing Industry Trade Show 2016 was a huge hit for their 2016 show. The show was held at the Indianapolis Convention Center in Indianapolis, IN from December 8-December 10, 2016.  Tens of thousands of Motorsports professionals came out and enjoy the three biggest days in racing, living up to its billing.  Attendees and Exhibitors left the show in awe at the quantity and quality of activity in and around the Indiana Convention Center due to Performance Racing Industry Trade Show 2016.

The show brings in buyers from all 50 states and 70+ countries and shows more new racing products than anywhere on this earth! At Performance Racing Industry Trade Show 2016 you can capture your share of the powerful market of racing, conduct business face to face with racing key decision makers and get your products into the all-important racing distribution pipeline. 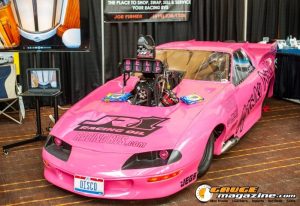 Long time Gauge Magazine supporter and friend, Disco Dean, had his famous ride Stinky Pink at PRI 2016.  Be sure to check out our live interview with Disco Dean where we ask him about his race on Street Outlaws again Big Chief!

Performance Racing Industry Trade Show 2016 has their dates and for the 2017 show up, you can check out their website for that information and more.