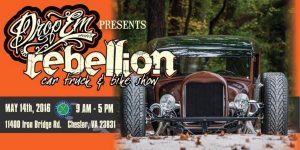 REBELLION Car, Truck, and Bike Show 2016 held on May 14, 2016 and was on fire this year! With the weather making a questionable appearance, the crowds still poured in to attend this event with high expectations from the years before.  REBELLION is a family friendly event with games and contests all day, but they also give out awards for the Top 75 vehicles plus specialty awards!

This year was a special one as they were holding two raffles, one of which 100% of the proceeds went to charity; the other being a 50/50 with the proceeds going to the Miltz Family. Many of the spectators and vehicle owners at REBELLION Car, Truck, and Bike Show 2016 participated and gave to those who need it the most, it was a truly heart warming scene.

This ride caught the eye of many spectators at REBELLION Car, Truck, and Bike Show 2016. This Dodge 4×4  had many unique characteristics about it; suicide door, hydraulic bed, clean interior, and its lifted to the sky; what more could you ask for?

Interested in more car show coverage? We have coverage of shows dating back from 2001!