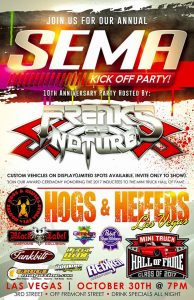 SEMA 2017 Freaks of Nature Kick Off Party had become a Monday night tradition for everyone that attends SEMA.   The pre-party is held over on 3rd street at Hogs and Heifers Saloon and Gauge Magazine has had the joy of sponsoring this event for the past 10 years!

Every year, our friends over at TR Manufacturing CNC cut out special awards for our west coast photographer, Chromey, to pick his favorite vehicle from the show.  This years winner was Rich Jones with his 1965 Volkswagon Karmann Ghia.  Check out the pictures below of his ride!

This Video is of Shannon “Freakmaster” Vanderaa presenting the Gauge Magazine award to Rich Jones for his 1965 VW Karmann Gia.

Below are the names and award of the 2017 Mini Truck Hall of fame class.

Congratulations to you all!

Gauge Magazine has been working with Freaks of Nature and Shannon for years,  since they decided to start hosting this annual event.  We are excited to continue on this tradition for many to enjoy and show off their rides!

Wanting to see what we did at previous years of the SEMA Freaks of Nature Kick Off Party?  We’ve got years of the coverage you are looking for!

Wanting to see more of Mini Truck Hall of Fame?  Check out their facebook page!