SEMA 2021 Domestic Cars was held in Las Vegas, Nevada at the Las Vegas Convention Center from November 2-5, 2021.  To us, it’s a guessing game before the show to see who will take over the event, domestics or imports?  This year, we believe the Domestic Cars won the event! 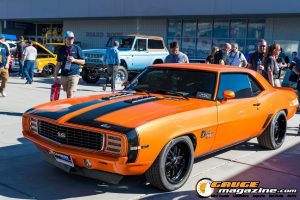 In 2019, a domestic car won the Battle of the Builders award and they did it again this year! Robert Matranga took home the title of the winner with his 1955 Chevy AKA Brute Force. Every part of Brute Force has been scratch-built or heavily modified and gets its name from Mike LeFever-built 540ci Merlin engine topped with Arias Hemi cylinder heads and force-fed by a pair of Garrett turbochargers through a custom-built Hogan intake.  This Chevy is completely mind blowing!

The top 12 for the SEMA 2021 Battle of the Builders were as followed:

Speaking of Matranga, another one of his domestic rides completely stole the show from SEMA 2021 Domestic Cars as well.  His 1964 Ford Galaxie 500 SOHC Hemi brought the attention from many but also left many questions, which is what they wanted.  The even named this Ford “What If?” The vehicle is supposed to be a representation of what a Ford Galaxie 500 would like if they hadn’t banned 427ci SOHC from the NASCAR competition in 1964.